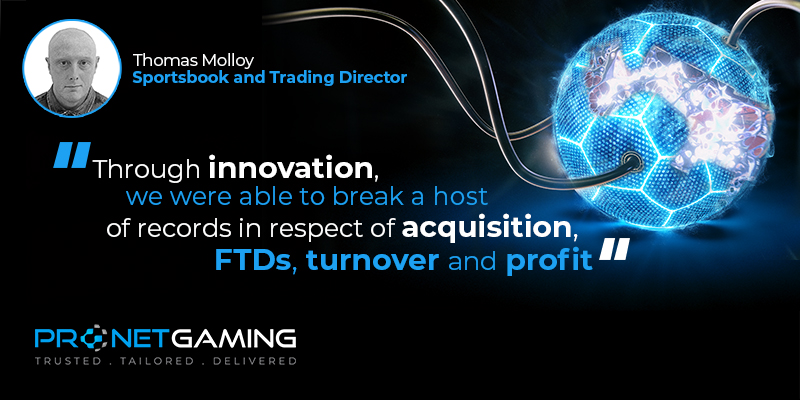 Director of Sportsbook and Trading Thomas Molloy, reflects upon a unique and record breaking Euro 2020 with SBC

It may have ended in heartbreak for Gareth Southgate’s men, but while England failed in their quest for glory in the Euro 2020 final against Italy, operators we spoke to around the world were left smiling after a very positive tournament experience.

In all the markets we supply our platform to strong margins were reported. Before the competition began, we developed a set of bespoke sports betting widgets for our partners around the world, offering ready-made coupons with pre-built accas and which were localised for particular markets. The user experience is more important than ever when big tournaments arrive and it is vital for operators to be able to differentiate themselves from the competition with strong features. Through innovation, we were able to break a host of records in respect of acquisition, FTDs, turnover and profit.

Results-wise, Euro 2020 was beneficial for operators not only in terms of huge bet volumes but also results on the field. Every sportsbook pins its hopes on less-favoured teams producing upsets and there not being too many goals. In the first respect, we saw pre-tournament favourites France defeated unexpectedly in the last 16 of the competition, missing out to Switzerland in a penalty shoot-out. When it comes to goals, there were 142 across the course of Euro 2020, at an average of 2.79 per game. That is the best goals-per-game ratio since the group stages were introduced, but within that mix you also had a conservative England team who were held back early on. When Southgate’s much-fancied side failed to hit the target in a 0-0 draw against Scotland, many operators were left with smiles as wide as Wembley Way.

Euro 2020 was a unique competition in many respects. Arriving as it did in a pandemic, there was much criticism of the decision to plough ahead with the plan – which coincided with the 60th birthday of the European Championship competition – to spread games across the continent, from Baku in Azerbaijan to Glasgow, 2,300 miles apart. Again, this arguably served to benefit operators. Some teams never seemed to settle in properly to the competition. Few people (if any) would have predicted before the tournament started that all three major countries from the vaunted ‘Group of Death’ – France, Germany and Portugal – would fail to make the quarter-finals.

The focus of the domestic media was well-trained on England both in the build-up to the tournament and, naturally, as the team progressed through to the final while playing all but one match on home soil at Wembley. Outside the UK, the prevailing view is that England remain the great under-achievers and therefore not a great proposition. What we saw was plenty of late pre-tournament money coming for Italy and France.

Operators reported that betting patterns generally remained consistent throughout Euro 2020, with 1X2, handicaps and goal markets remaining the most popular options for bettors on our platform. Although player prop markets are beginning to grow in popularity, they still only take a fraction of these main markets. What we also saw was our average turnover per game increasing the longer the tournament went on, which speaks to an ability to retain the interest of end users.

As a platform provider with a strong focus on emerging markets, the past few weeks have not only been about Euro 2020. Far from it, in fact. With a growing number of operator partners across the LatAm region, the Copa America also brought with it significant engagement. The timings of the matches provided for a perfect mix. For our end users in Europe, Copa matches featuring teams with huge followings like Brazil, Colombia and Argentina supplemented Euros events, and vice versa in LatAm. The matches from both major competitions were spread right across the day and for the most part, took place in isolation. This allowed us to attract the widest audience possible, which helped us hit those record-breaking numbers.

As to what to expect from the coming season, there may not be too much rest for many of the players who have taken part Euro 2020 and the Copa America. Qualifiers for the UEFA Champions League 2021-22 are already under way and many players will be expected to pick up from where they left off after a short break. That said, many of the bigger clubs across Europe will be able to utilise their large squads until they return to full strength. From an operator perspective, there will not be any holding back at all, with plans already well-set to again capture the imagination of bettors worldwide as domestic concerns supplant the international.