The African opportunity: How much of an international draw is AFCON? 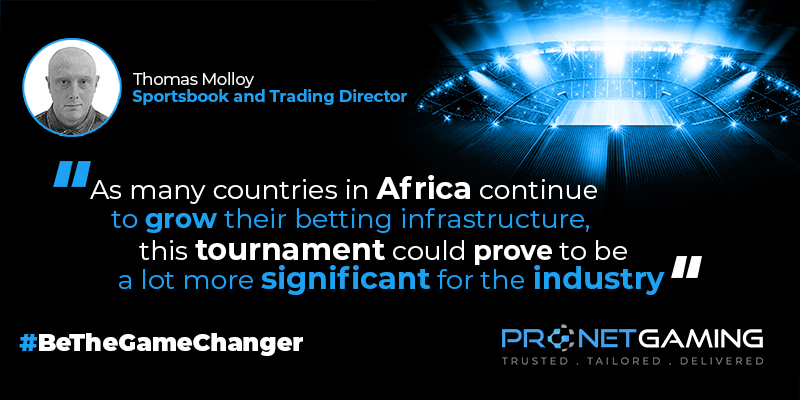 The African Cup of Nations came to an end earlier this month with a final that produced tension worthy of any World Cup final. However, the tournament has not yet attained the international attention of many of its counterparts. We caught up with Thomas Molloy, Sportsbook and Trading Director at Pronet Gaming, to find out how the tournament performed in the betting arena and how likely it is to grow.

How was the overall performance for operators during the tournament? What were the reasons for this?

The betting performance of this year’s AFCON was extremely positive, driven by a generally low scoring tournament and a 0-0 final that helped us achieved an overall tournament margin of over 25 per cent, almost double that of Euro 2020.

For people across Africa, the tournament was cause for a massive amount of excitement and pride. Teams from 24 different countries competed in the tournament. But the contest is followed closely even in countries that didn’t make it into the tournament, which added significantly to this positive sports betting result.

With that in mind, it was disappointing that the organisers experienced pressure from European football clubs. Dozens of players from top club teams were accused of taking ‘time off’ to play for their countries, but for the vast majority it is a huge honour and matter of pride to be involved in what is a prestigious competition. As many countries in Africa continue to grow their betting infrastructure, this tournament could prove to be a lot more significant for the industry than it already is but needs a little more latitude in order to grow further in status.

The event has grown to be hugely anticipated throughout African, but to what extent is AFCON a draw for international bettors?

There were rumblings of a lack of respect being shown by parts of the media with regards to the importance of the tournament, as well as the questions over some players potentially remaining with their club teams instead of heading out to Cameroon.

What’s clear from a betting perspective is the huge interest from many regions – not only our client base in the African region. With games played at favourable times of day and with so many of the world’s top players included, notably the two that shared the final in Egypt’s Mo Salah and Sadio Mane of Senegal, there was significant engagement from a wide-ranging client base.

A more united front between the European clubs and tournaments like AFCON would be more beneficial, not only to the sports betting industry, but for the game as well. Especially as fans in these countries are so excited to see stars like Mane and Salah come home to play.

Did the winter break in the EPL coinciding with AFCON help focus bettor minds on the competition?

Absolutely. Out of the 52 matches that were played throughout the tournament, 32 took place with no EPL action that day, which proved to be hugely significant. In these games, bet counts for AFCON contests were 30 per cent higher than days that also saw Premier League action, suggesting that the lack of EPL fixtures helped focus the minds of bettors.