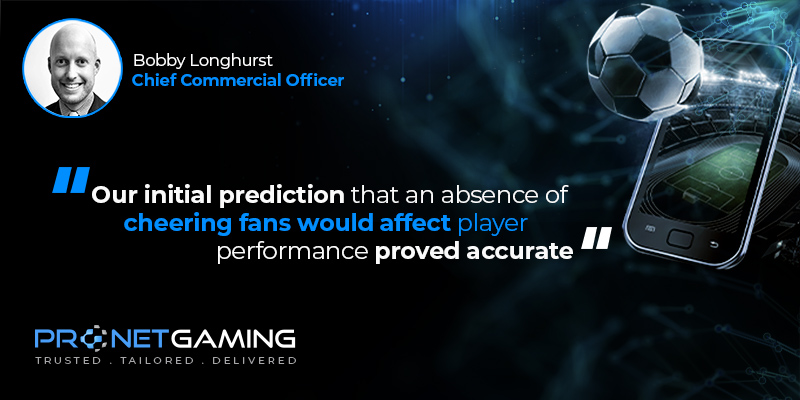 CCO Bobby Longhurst, speaks to SBC about what the company has learned since the return of the world’s most popular football competition

With a significant mid-season break, a host of safety stipulations in place and empty stadia, it was always unlikely that football would return with quite its usual pizzazz. Nevertheless, one thing that has not changed is the enthusiasm with which customers have seized on the opportunity to place their bets on The Beautiful Game again. Business is booming.

What has been really fascinating about the return of the Premier League in particular, however, is the way in which the trends around those bets have shifted. Here at Pronet Gaming, we’ve been keeping a close eye on how the new conditions have affected play on the pitch, and in turn, how gamblers are placing wagers.

In most of the leagues it appears that teams have struggled to pick up where they left off before the lockdown. Many who are safe from the dreaded drop appear to be playing the season out. This has resulted in fewer goals, fewer shots and a lower conversion rate of chances to goals.

With the exception of Serie A, which is bucking the trend, this is the case across all of the big European leagues. Over 70% of goals have been scored in the second half of games, indicating that the extended hiatus may have had more of an impact on match fitness than some previously envisioned.

Football is a game in which teams thrive in a febrile atmosphere. Our initial prediction that an absence of cheering fans would affect player performance proved accurate, with Premier League home games now as close to being played on neutral ground as they could be. In particular, this seems to have impacted the teams in the lower reaches more when facing those above them in the table. We anticipated games would be more likely to be cagey as a result, and that has certainly rung true, with 58% of the matches so far being goalless at half time as opposed to just 29% before lockdown.

Following the reduction in home advantage, we amended the thinking around our models accordingly. This proactive approach has been paramount in helping our clients stay ahead of the curve. These amendments ensured we spotted trends early and resulted in adjustments to our typical goal dependencies to mitigate possible value takers on the Unders in line with a drop in goals since the restart.

Where many competitors and their clients have taken a hit in recent weeks because they have simply run their tried and tested models without adjusting to the changing circumstances. This lack of foresight has undoubtedly led to an erosion in margins. A case in point is the popular both teams to score market, which has seen a spike in customers backing No.

When it comes to the return of recreational bettors with no hidden agenda, many have picked up where the left off, with match accumulators, over goals and both teams to score remaining popular. But shrewder ones have picked up on the lack of goals. To counterbalance this trend, our traders and customer profiling departments have proactively stayed ahead of the curve. They’ve done that by ensuring our risks are properly managed across the lifecycle of the odds, from creation to settlement and everything in between.

What we are concentrating on now is whether these current trends will remain once things make their way back to normal. With goals down, shots down and even sprints down, as players look to conserve energy, what we are currently seeing is almost a facsimile of friendly matches, with teams not match sharp, and a lack of atmosphere producing lacklustre performances. After a full pre-season and with the stadiums back to capacity, normal service will hopefully resume once again in the Premier League and beyond. But if it doesn’t, we’ll be prepared.