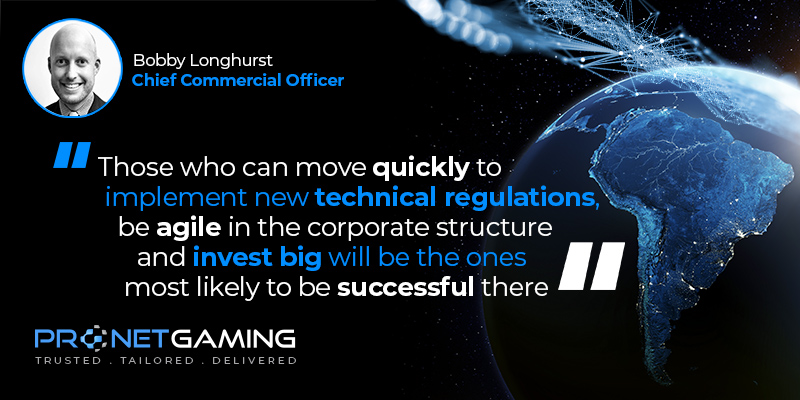 Until recently, Latin America was an emerging market with which only .com operators concerned themselves. But in the last three years things have changed.

Colombia has now regulated successfully with Argentina, Buenos Aires Province and City, plus Peru all following suit. More excitingly, so too is Brazil. On the face of it, the opportunity for a regulated online sports betting environment in last of these is huge: It is the sixth most populous country in the world and football mad. The devil will be very much in the detail of the impending regulations, however, which have now gone back and forth for over 18 months since Michel Temer got the ball rolling. Various proposals have been mooted, including limiting the number of licences awarded, and even potentially penalising ‘bad actors’ (those who had or are operating on a .com basis) with a six-month delayed start.  Time will tell.

One thing we do know is that a simplified product will be key, as will local favourites like video-bingo. From a marketing perspective, more above-the-line brand focussed campaigns will be important too, as opposed to the predilection for digital brand building that we see in Europe.  It will also be interesting to see where operators place their infrastructure. Of course, products need to be slightly different for each country, but there may be some overlap and efficiencies to be had with customer services and other operational functions, if allowed under the regulations. Colombia is currently showing the way with a set of technical regulations that bear a striking resemblance to those first implemented in Spain just under 10 years ago. A similar route in Brazil and elsewhere would benefit operators and suppliers alike. Whatever they decide, those who can move quickly to implement new technical regulations, be nimble on corporate structure and play the long game on investment, will be those who are the most likely to succeed In Latin America.