Alex Leese Discusses Navigating the US and Latin America 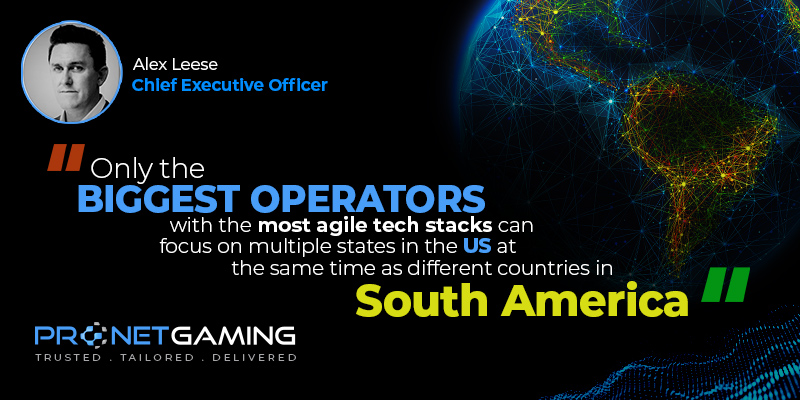 CEO Alex Leese, spoke to SBC Americas to discuss the opportunities that the market has and why it’s such a challenge to smoothly enter all markets

The repeal of PASPA and the opening up of legalized sports betting in Latin America has attracted international operators and suppliers alike, but rarely both at the same time. What are the reasons behind this trend?

The US presents an enormous opportunity for operators. This has been demonstrated by brands like William Hill and GVC, who have taken an early advantage by focusing their tech development on the market and forming the right partnerships.

At the same time, the fragmented regulatory landscape presents a huge challenge. Only the biggest operators with the most agile tech stacks can focus on multiple states in the US at the same time as different countries in South America. Given that joint ventures are often a necessity too, targeting both regions would stretch even the best-resourced teams.

Delays to regulation in Latin America may have provided some breathing space for operators with global ambitions, however. They can focus on the US for now, whilst keeping license applications warm down south and gaining more time to properly assess the tech roll out.

For technology and content suppliers, the choice is somewhat starker. Ultimately, they need to be ready to service operators from day one, requiring an upfront investment in technological capability with payback having to wait until deals are signed.

Does rushing into one region come with the trade-off of losing early mover advantage in another?

Given the cost and complexity of fighting on multiple fronts, it is clear that every operator and supplier must prioritize. But I also think that an element of compromise might help companies do more in more markets.

Opting to outsource their platforms to third-party providers might be a tough decision for the bigger operators who are used to their own proprietary technology in other markets, but it might be the pragmatic one. It is certainly an easier move for a smaller operator who could gain speed to market through this approach.

A pragmatic tech strategy will always allow operators to keep a few more plates spinning, whilst working with local partners can remove barriers too. For suppliers, it is more a case of one or other in terms of where to invest in tech and hence some of the recent M&A trends have pointed towards a more defined split of whether a provider can serve both continents.

With Colombia heralded as a leading light in regulation in Latin America, could neighboring territories and indeed US states follow its lead with progressive, innovator-friendly frameworks?

I think it is very unlikely that US states will be influenced by Colombia’s approach in any way. Or by any other market in LatAm or Europe, for that matter. It would be easier for the industry if they did, but the political and socio-economic levers are completely different.

The regulation of sports betting in North America is unlike other frameworks in the industry. Each state’s legislators have their own ideas. Latin American countries have tended to look to European-style regulation, however, particularly that adopted in Spain and Italy. As a result, many of the law firms and leading providers in those countries are proving influential on the continent and in Colombia in particular.