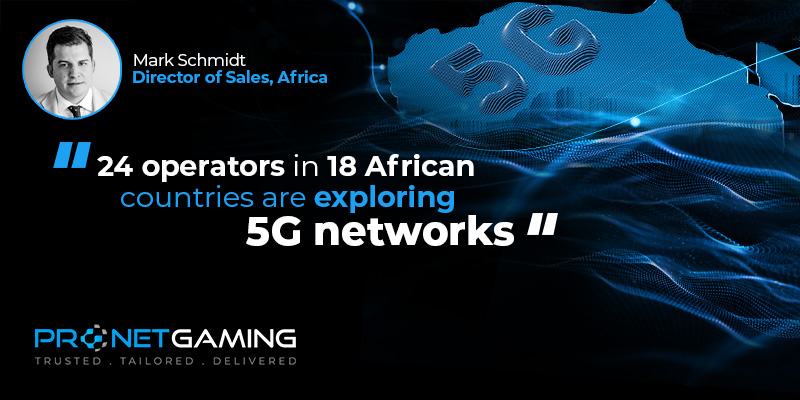 Director of Sales in Africa, Mark Schmidt, talks about the next generation of gaming

In a world that is increasingly connected, there is a rising demand for every-quicker mobile internet speeds and instant connectivity in every corner.

Africa is no exception to the rule. Though burdened by significant challenges in terms of infrastructure, new statistics from the Global Mobile Suppliers Association (GSA) have revealed that 24 operators in 18 countries in the continent are evaluating, trialling and deploying 5G networks.

Without naming specific countries or operators, the GSA report hints at operators in South Africa being at the forefront of the intended deployment of 5G into commercial networks. Operators acting in Nigeria and Kenya are also believed to be examining their options. Worldwide, the report stated there were 61 countries with live 5G commercial networks by the end of January 2021, with 413 operators in 131 countries investing in the technology. In turn, the number of available 5G mobile devices worldwide increased by over 60 per cent in six months, according to the report.

Once in widespread use, 5G networks promise to revolutionise the mobile experience. Existing network capacity will be boosted and new possibilities in product development start to open up, particularly around the live streaming of sport to mobile devices.

While talk of super-fast mobile 5G networks and uninterrupted coverage is premature as things stand across Africa, it is safe to say there is an increasing focus on the advancement of mobile technology in the region. In terms of gaming, the continent has historically been dominated by retail but things are beginning to change. Mobile money has long become a staple for bettors in Africa. Operators successfully integrating with local wallet providers to provide simple deposit and withdrawal processes have helped build a groundswell of confidence in mobile betting.

The impact of Covid-19 has sharpened minds within the industry. Cash remains king and the forced closure of retail establishments has had a major adverse impact on Africa’s betting and gaming industry. With the rapid growth in mobile use, though, operators have increasingly seen mobile as forming a potential pathway not only through lockdown difficulties but also far beyond.

That said and even despite the acceptance of mobile money, severe challenges remain. In Nigeria, for example, the reality as it stands is that the cheapest pre-paid mobile data plan is around $0.30 for 50MB. That’s quite a barrier for a population where, according to figures from the World Bank, 68 per cent of the population subsist on $1.25 a day. At the very least, such financial barriers for vast swathes of the population across Africa puts into context talk of all the many wonders 5G networks can bring for the industry.

Similarly, while smartphone penetration across the world runs at four out of every 10 people across a global population of 7.7 billion, the adoption rate in Africa varies hugely from country to country. Remove South Africa from the equation and the picture becomes slightly more uniform, with feature phones dominating in most markets.

Against a backdrop of costly data and so many devices that are simply not capable of carrying rich content, operators must consider an approach which caters for both ends of the spectrum, with flexible solutions that also incorporate USSD betting. USSD allows for mobile wagering without the need for Wifi, GPRS or 3G and has taken off in countries including Tanzania, Kenya and Nigeria, where smartphones are not as prevalent.

Our work in Africa has seen us advance our platform through the development of Opera Mini capability, which provides access to a market containing 120 million users of the mobile browser across the continent. Opera Mini negotiates many of the hurdles that have stood between mobile sports betting and mass adoption in Africa, with the browser enabling operators to pull back many of the data-intensive features within sportsbooks and streamlining the process of placing bets cheaply and at speed.

As early movers on Opera Mini, on a platform which combines USSD and mobile wallet integration, we believe that we are well-positioned for upcoming moves by major players into Africa across the next 12 months. While 5G will have to wait for most across the region, it pays to get ahead of the game in offering truly a truly localised, flexible platform solution right now.