Thomas Molloy Speaks About the Importance of Esports 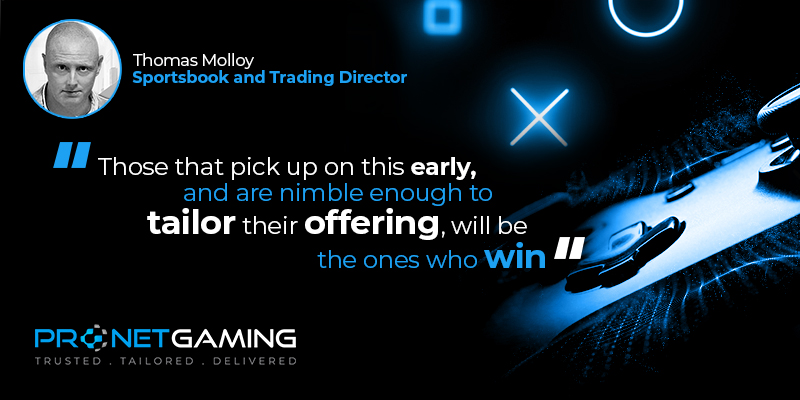 What eSports solutions does Pronet Gaming offer its partners in LatAm?

Pronet Gaming offers a comprehensive esports solution by working with industry leader UltraPlay. We have a huge number of live events, which few if any providers can match. Each and every one of them is supplemented with live streaming to engage our partners’ players. We are very serious about esports as an offering and have seen a huge amount of growth in this area during the last 12 months. With the vertical expected to have 55 million followers in LatAm by the end of 2021, our expansion there can’t have come at a better time.

What eSports games/tournaments do you offer wagers on there?

We offer the complete suite of games and competitions, with more than 25 titles offered pre-match and live. We also provide an unrivalled number of betting options. Major titles like CS:GO, DOTA and LOL are the most popular, obviously, but we cater for all-comers. The sheer variety means that there is something here for everyone. This also provides new customers and new revenue streams for our operator partners, as many of these players are new to the betting and gaming industry.

Why is eSports so important to the emerging online gambling industry in Latin America?

The growth of esports in general is on a steep upward trajectory at the very same time that betting and gaming is in the emerging LatAm market. With the pandemic having such a significant impact on sports in general, it has opened a window of opportunity for emerging markets to push a new vertical to its users. That might have been far more difficult had sports have been available. The LatAm player base is also already proficient in using online payments and transactions, which is key. They’ve also fallen in love with esports to the extent that, according to Twitch, popularity there will shortly outstrip that seen in North America. Streaming figures were up 50 per cent alone in the second quarter of 2020.

Where eSports is already being wagered on in LatAM, has interest been sustained with the resumption of live sports?

Generally speaking, esports was a very small percentage of turnover before the pandemic. During the downtime for sports, its popularity hit an all-time high – perhaps not surprisingly. Some people predicted that when sport returned that would tail off. But it has now settled at a percentage that is a lot higher than pre-pandemic levels, suggesting people have got a taste for it and would like to continue. Some of the old-school operators and suppliers that think this is a flash in the pan are missing the point. Fortunately, at Pronet Gaming, we are ready for the future.

Are there some Latin American countries where it is/will be more important than others? What about Brazil, for example?

There are certainly countries where esports is more developed today, but I would expect that to level up. Betting behaviour tends to be pretty similar across countries. The difference with Brazil, of course, is sheer size and scale of the potential market. The popularity of esports will continue to grow on the continent. Those that pick up on this early, and are nimble enough to tailor their offering, will be the ones will win. Here at Pronet Gaming, our platform offers a quick and easy way to market, offering the very best of what esports has to deliver.

eSports has established a large following in LatAm, but how does the betting industry convert that audience to betting on games if they have not done so before?

Customisation and player experience is key. One the most famous titles in LatAm is CS:GO. The ability to customise the experience either by different skins, or improving visual assets like weaponry, is very popular and a driver in conversion. Such items have been used worldwide since 2011, with some having serious real money value. There are hundreds of opportunities for players to wager on such items in esports. The audience already knows how to bet, we just need to educate the players as to what’s on offer. By the end of this year, the video game sports market is expected to generate around one billion dollars, which represents a growth of 15.7%. Operators taking advantage of newly regulating markets in LatAm need to ensure they’re getting a piece of that action.