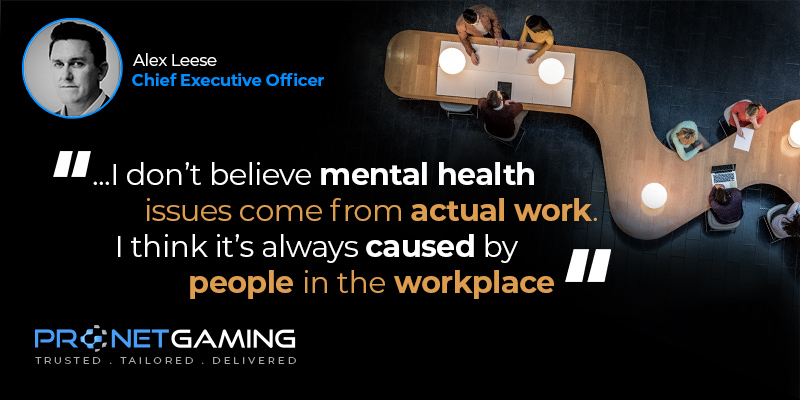 Mental health has always been something Pronet Gaming has kept an eye on and CEO Alex Leese, is keen to stress that it’s not just something you do for lockdown

When Leese made the decision to close its London office, every employer shared the same concerns about how it would work. From an IT perspective, Pronet Gaming was all set up and it had always encouraged flexible working so it was already halfway there in terms of preparedness for remote working. “Even I actually was quite astonished by how productive we’ve been. In the aftermath of ICE, that’s when we were actually hoping to close all of our deals after having done such a good job on the stand there. Everyone has just been excellent and been on it,” he says. Much of this he attributes to the recruitment policy of the company and bringing staff in with the right can-do attitude and mindset.

When it comes to looking after the wellbeing of his staff, Leese finds having a degree of empathy and personal communication is far more effective than sending out an email about downloading a meditation app. Every week or fortnightly Leese makes a personal call to all his staff just to see how they are doing. “It makes a massive difference because it makes the staff feel cared for and it makes them feel safe,” he remarks.

During some of the recent hot weather in the UK, Leese sent out an email to his staff encouraging them to get out in the garden for some vitamin D and to work flexibly. “I think that counts a lot more towards wellbeing than maybe something a bit more impersonal in my mind anyway,” he says.

Referring to LinkedIn posts where companies are posting about what they’re doing for their staff such as taking out 10 minutes every day to sit and reflect, Leese feels like this is simply papering over the cracks. “If you think about it, it’s never caused by the work itself, I don’t believe. There’s always going to be pressure on the work but I don’t believe that the mental health issues come from the actual work. I think it’s always caused by people in the workplace.

“When I took over the reins at Pronet, I always wanted to work for a company where people felt safe and confident in being able to work flexibly without being called out for it either formally or informally. And I think sometimes informally is actually the part which is more dangerous. People feel afraid because of perception etc as opposed to a true meritocracy of the work shining through.

In terms of keeping staff fit and active, Pronet Gaming’s CEO has found that online exercise classes don’t really fit the profile of his staff so he’d much rather urge them to get outside and spend time with their families when they can. The company does already have a health care plan in place for all staff with Vitality, which also provides additional benefits and resources, alongside the firm’s gym membership option.

To keep staff engaged and motivated during lockdown, employees have a weekly Friday call and weekly virtual drinks get-together where everyone avoids work talk and just chats about how they’ve all been doing. During the weekly work call, Leese provides an update on how the business is performing and any new deals that have been signed, which provides much-needed reassurance on job security in such an uncertain economic climate.