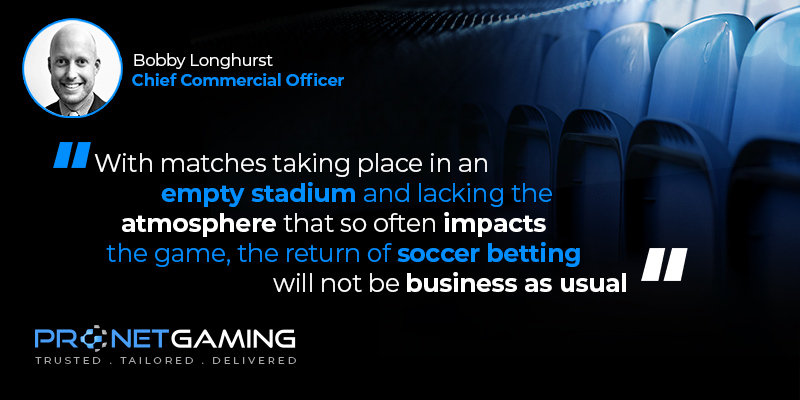 The return of live sports should signal welcome relief for operators who have had to navigate some choppy water in its absence in recent months. Many will have converted a percentage of customers to alternative betting opportunities, with eSports and virtual sports having joined traditional casino products on a stage vacated by perennial favourites soccer and horseracing. But for the majority of bettors, the chance to see their heroes in action and have a bet on the games will see battle re-joined in earnest.

The German Bundesliga has been operating behind closed doors for some time now, with Spain’s Primera Liga stepping out of lockdown last week. Both have attracted good business for the bookies. And yet it is anticipated that the return of the English Premier League this week will provide the real reboot so required by the industry. But what has changed in the interim and what pitfalls do ring-rusty traders need to avoid on the new-look playing field?

One thing is for sure, with matches taking place in an empty stadium and lacking the atmosphere that so often impacts the game, the return of soccer betting will not be business as usual. Indeed, the stats so far make for stark reading. Around 46% of teams normally win games played in their own stadium, spurred on by the support of their own fans. But to date in the Bundesliga, the first major league worldwide to kick-off after COVID-19, only an ironically-numbered 19% of home sides have defeated their opponents.

Another trend we’ve seen in Germany is that players are scoring less goals, with the rate per match dropping from 3.25 to 3.07. Multiple factors are likely to have influenced this, with player fitness and a lack of sharpness in front of goal most likely. Curiously, despite less balls hitting the back of the net in total, there have been far more victories by three or more goals where they have occurred. So far in the league, 5-2 and 4-1 victories have been frequent, a trend which has a significant impact on pricing up correct score markets in which 2-1 and 2-0 lines were always the most popular.

In-play betting, meanwhile, is unlikely to be drastically affected by this season’s unusual conditions. It’s been of huge importance up until now and will likely continue to be a significant revenue driver as more fans watch from home. In fact, with the increased betting opportunities presented by the staggered kick-off times planned for the likes of the Premier League, it wouldn’t be surprising if we saw a respective rise in in-play bets.

At the same time, the intense new schedule demands a high volume of matches to be played in a shortened period, presenting fitness challenges that are hard to predict. We’ve already seen extreme player fatigue in the Bundesliga, and the limited information available on player performance and fitness levels has made pricing up prop bet markets more difficult than in normal circumstances. The increase of substitutions from three to five per match also has implications which add to the challenge for traders. So far, customers have continued to wager on their favourite picks, and if goals start to increase as a result of substitutions, prop bets may become a more attractive flutter.

Will these factors have a significant impact on the betting behaviour of casual sports bettors? Probably not, in truth. After such a prolonged hiatus, most will just be happy to see games back on the television and will wager as they have always done. The excitement surrounding the return of major football leagues and other core sports will certainly bring a rush in the number of bets placed, as experienced in Germany. But there will also be more serious customers among them that are cognisant of the unusual circumstances and will be looking to take advantage. If in-play models are not adjusted to reflect the season’s nuances, they may well be able to get an edge on pricing missteps. Whilst we all welcome the return, therefore, it is clear that expert trading, fast and accurate data, as well as extensive risk management, will be needed to help operators avoid the pitfalls and make a strong return to a new form of normality.