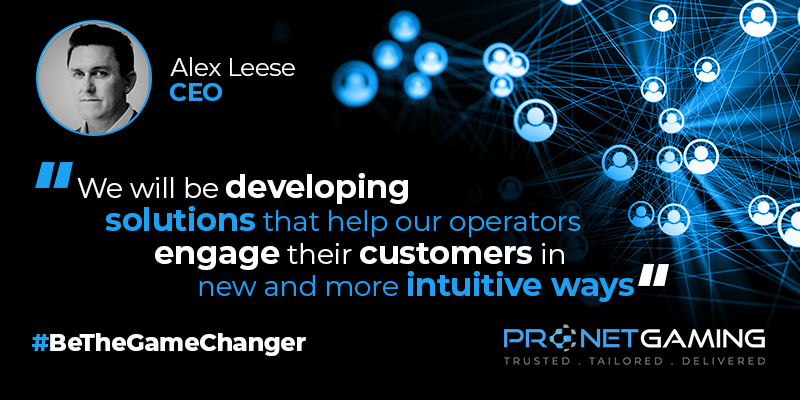 Despite being just as challenging as the previous year in many ways, 2021 proved to be a resounding success for platform specialist Pronet Gaming.

After introducing smash-hit games and executing perfectly timed launches, the company ended the year announcing it had reached its three-year growth goals after just 18 months.

Key to this rapid growth has been the company’s portfolio offering end-users thousands of betting opportunities across more than 35,000 live events in more than 65 sports.

5 Star caught up with Alex Leese, the company’s CEO, to learn more about this growth, the innovations that made it possible and Pronet Gaming’s plans for 2022.

Pronet Gaming announced that it had reached its three-year targets 18-months early towards the end of the year. What led to this leap in progress?

There were quite a few factors working together in the right way to make this achievement a reality. For one thing, our platform solutions proved increasingly popular across global markets, including in Africa and LatAm, which resulted in a two-fold rise in turnover. In total, we have signed over 35 new clients in the past 18 months.

Our industry-first, in-house developed features such as FastBet and Popular Bets and our proprietary betting widgets introduced during the Euros and Copa America last summer all helped maximise the player experience.

On top of that, by offering an entirely modular system our customers have been able to cherry-pick the sports betting features that suit their specific needs in regulated markets. This has allowed them to create better experiences for their audience, enabling them to increase revenues while retaining and engaging players.

We have consistently focused our efforts on customisation, speed-to-market and product innovation, a strategy which we are delighted to say has certainly paid dividends.

Can you tell us more about Popular Bets launch?

We released our Popular Bets and Popular Events widgets in October. They allow operators to display a particular market’s current top-10 bets and top-10 events, automatically refreshing every five minutes.

This was a particularly exciting release for us, as it really felt like we had a game-changer on our hands. Offering our customers a localised, intuitive way to immediately boost engagement was extremely gratifying. With minimum effort on the operators’ part, they can be confident that their players are constantly being shown the most popular bets and events at any one time.

Our priority was to provide flexibility of use, allowing operators to display the bets and events on different areas of their sites while also being optimised for mobile and desktop. It was important that they auto-populate according to the operators’ markets, which has gone a long way to making this

the hassle-free and personalised engagement tool we set out to make. We certainly look forward to producing further innovations that can help top this performance in 2022.

The company also saw a number of high-profile partnerships, which of these stand out?

Tenlot certainly stands out, being the first such agreement with a dedicated national and regional lotteries operator. The deal certainly opened a number of doors that contributed to our success last year and this process will doubtless continue throughout this year.

Then truenorth.bet went live in Canada on our platform, which was one of our most exciting launches to date. The operator has earned a deserved reputation for being the country’s most legitimate brand in the face of unregulated competition, adhering strictly to the regulatory framework from day one. This naturally made it a challenging project, but successfully working around these obligations and implementing the local responsible gaming requirements, data protection, self-exclusion and anti-spam laws demonstrated the flexibility and market specificity of our platform.

Pronet Gaming introduced a number of games to its platform in the past 12 months, what are some of the highlights?

It’s always our priority to give our clients early releases on highly sought-after games and Gonzo’s Treasure Hunt was a prime example of this. The outstanding quality of Evolution’s augmented reality products mean they stand head-and-shoulders above the competition in a saturated market. This example was an inspired use of the immediately recognisable Gonzo character within a live setting and a slots-style backdrop, which led to the concept performing strongly across a number of regulated markets worldwide.

Cash or Crash followed on from this and resonated equally well with players, especially due to the intuitive live game show element. With a 20-step, ladder-style pay table, players gain height with each green ball that is drawn. For each drawn green ball, the player can decide to Continue, Take Half or Take All. The dynamic worked well across a wide range of demographics.

We are always on the lookout for fresh, innovative content that adds value to our portfolio and those two releases from Evolution certainly fit that bill.

The betting widgets with pre-built accas that Pronet Gaming released during the Euros proved popular as well. Why do you think that was the case?

Timing was everything with this release. Our in-house team rolled the product out on the eve of the Euros football tournament. This was a time when sports betting operators worldwide were competing more strongly than ever for market share.

It definitely helped that this was the first big sporting event the global community was being treated to in a long time because of the pandemic. It’s gratifying that we helped to add to the fun of that event while also boosting engagement.

What can you tell us about your approach for the World Cup kicking off in Qatar this November?

We obviously can’t give too much away at this point. It’s safe to say that once again we will be developing solutions that help our operators engage their customers in new and more intuitive ways. The event could see two of the sport’s all-time greats, Lionel Messi and Cristiano Ronaldo facing off against each other, almost certainly for the last time in a World Cup, so I think it’s going to be a betting event like we haven’t seen before.

Within our wider offering, we are getting ready to unveil a new system that will enable operators to sharpen their approach to player value and engagement. Our aim is to remove the strain when it comes to managed services and enable operators to do what they do best, deliver first-class entertainment. But again, I can’t say too much just yet.